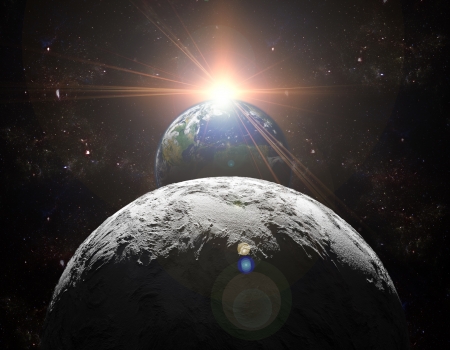 THE MOON AND THE MO’EDIM
The Bible does not clearly state that the month begins with the new moon. Yet Genesis 1:14 tells us that God created the sun, moon and stars for signs and seasons. And Psalm 104:19 specifically states that it is the moon that marks these seasons. The Hebrew word for seasons is “mo’edim,” which literally means “appointed times.” It is the same word used in Leviticus 23 to describe the feasts and holy days that God commanded Moses and the children of Israel to observe. The word used for new moon in Hebrew is “Rosh Chodesh,” which literally means “beginning, head, or renewal, thus “head of the month.”  And in the Bible, the months were numbered rather than named.  The Hebrew names we often hear became part of Jewish culture as a result of the Babylonian captivity.

WE’RE NOT UNDER TIME
If we are in Christ, we have been given dominion over creation, which includes time, since time is a created thing. Time is a currency of earth, and God is teaching His sons the rhythms and the mysteries governing earth, so that we can rise above them, rule over them and advance His kingdom here. Understanding and celebrating his “mo’edim” (appointed times) is just one small part of this Divine school of understanding “how it works.”

COME JOIN US
So come join us as we step outside of our rigid calendar-driven lives and into the Father’s dancing rhythm. Come celebrate with us the mystery of His mo’edim. Come eat some scrumptious food with some of the friendliest people you’ll ever meet… and have the time of your life!

2017 Dates are as follows. Contact info@allthingsrestored.org for times and locations.